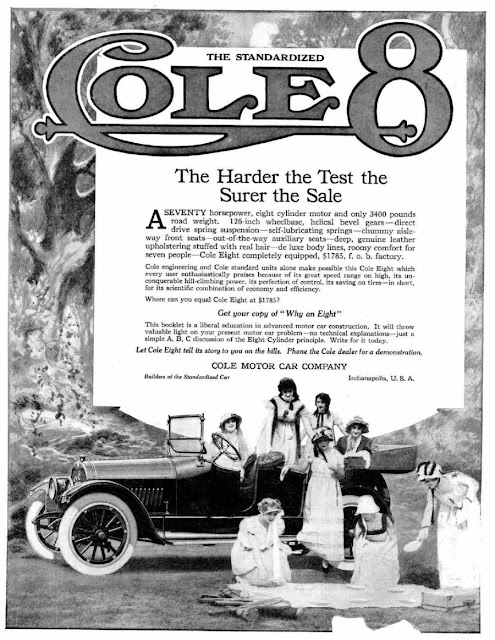 I wonder how many people worked in the advertising department at the Cole Motor Company in  1911?  They only built 860 luxury cars that year. But then J. J.  Cole had always been more interested in sales than engineering. 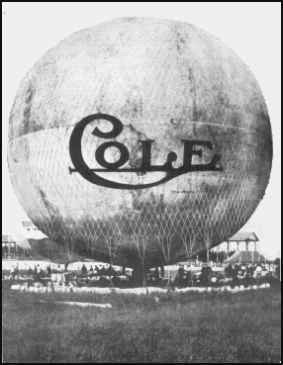 Besides supporting Bob Fowler’s “Cole Flyer” transcontinental flight that year, the Indianapolis based company also had a squadron of racing cars which toured the country, and a big balloon that made appearances at county fairs. "Joe" Cole even invested in the founding of the Indianapolis Motor Speedway.  As their company slogan went, “There’s a Touch of Tomorrow in All Cole Does Today”. Well, maybe. But the touch was not to last forever. 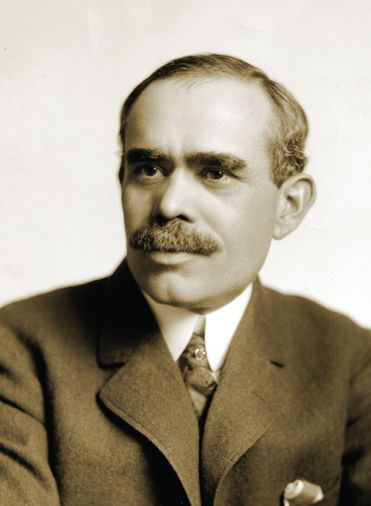 Joseph Jarrett Cole had built a fortune in horse buggies before he borrowed enough cash from Harvey Firestone to start his auto company in 1909. He believed in the "Standardized Car" principle. 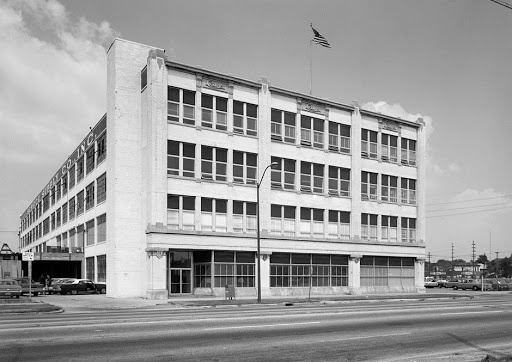 The Cole plant built nothing, but rather assembled what J.J. considered the best parts from other manufacturers and put them together in the Cole building. “A man’s car any woman can drive.” 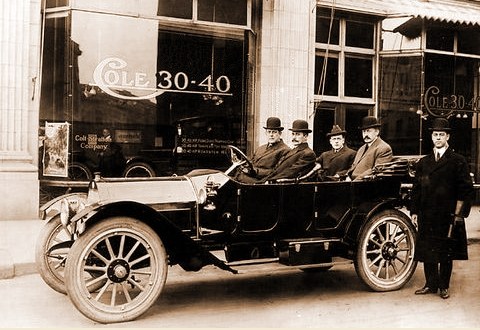 In 1911 Joe used an "L" head 4 cylander engine from the Northway Engine Works in Detroit.  And his cars featured such innovations as balloon tires, “adjustable door glasses” (i.e., removable windows),  a 15 foot long dashboard light and a speedometer that read up to 75 mph; unfortunately the Norway engine only produced 30 horse power, and flat out the Cole Model 30 and model 40's  could only reach 45 mph.  Bigwigs at General Motors wanted to buy out Cole, and when Joe wouldn’t sell they just bought up his suppliers - including Northway -  and gradually cut him off. 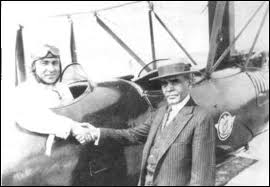 With the post war recession of 1920-21 Joe realized the jig was up and began a careful liquidation of his company.  Ten months later, on 7 August, 1925, at the age of 56, he unexpectedly died of a heart attack.   His family kept the name on The Cole Building  and rented it out  into the 1970’s. Thus fared the man who sponsored Bob Fowler's flight. 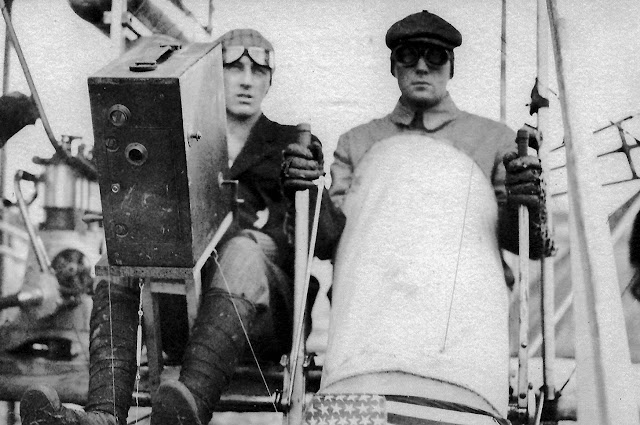 After he finally reached El Paso in 1911, it took Bob Fowler(above, right) a month just to escape Texas. But he made a lot of money there. On Christmas Eve he  crash landed in a rice field outside of Seixas, Louisiana.   Having lost the race to Rodgers, and prefering to spend the winter in warmer climes, Bob took a couple of days to film floods in the east Texas and southern Louisiana carry. He carried a cameraman aloft (above) and made movie history.  He landed in New Orleans at about 3 p.m. on New Year’s Eve. 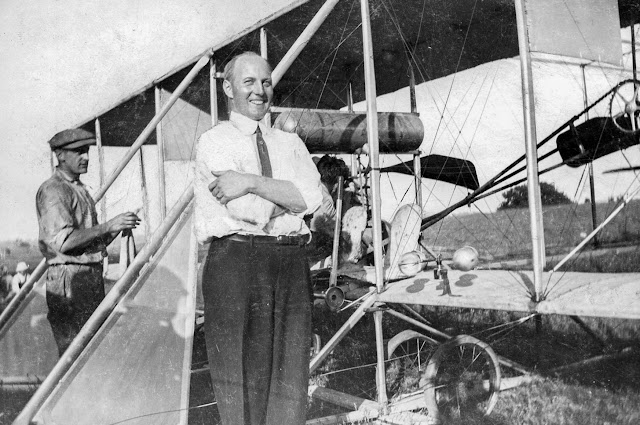 It took Bob Fowler until February of 1912 to reach Florida. He landed on the sand at Jacksonville Beach on 12 February 1912 -  becoming the second man to cross the nation by airplane. Not that very many people noticed.

Bob would later observe with understatement, “I was the first to start and the last to finish.” It had taken him 116 days and 72 hours of actual flight time to cover the 2,800 miles across America. The very next year Bob Fowler made the first non-stop transcontinental flight – and the shortest. Just 36 miles across the Isthmus of Panama. He filmed it, of course. Bob Fowler was a pretty crafty fellow. Except he was immediately arrested. The defense department wanted him charged with espionage, for filming the Panama Canal. But eventually cooler heads prevailed. 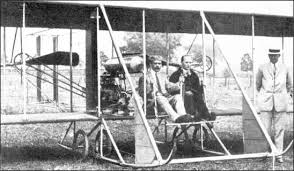 Bob sold The “Cole Flyer” in 1912, and after being used in the movie business for a few years, it was sold again, this time for scrap wood. The engine was the only part saved, But after his flight Bob traded the Cole 4 engine for a new model Wright engine, and that is still on display at the Exposition Museum in Los Angles. So nothing remains of the Cole Flyer. 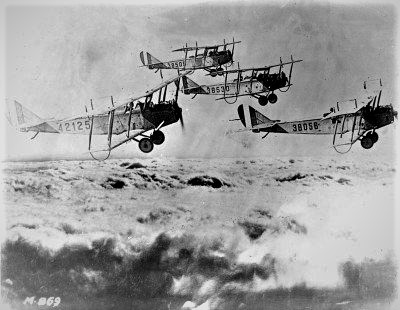 In 1916 Bob started the “Fowler Airplane Corporation” in his home town of San Francisco. He modified and sold 125 Curtis JN-4’s (“Jennys”) to the U.S. Army as trainers, and after WWI he started Bluebird Airways, a passenger service around the bay area. He retired to San Jose and died in 1966, at the healthy old age of 82. 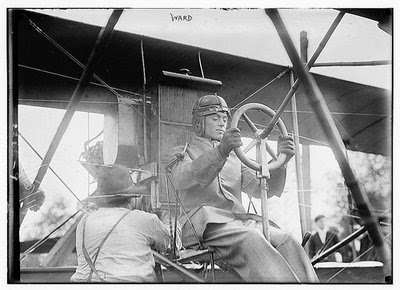 Jimmy Ward (above), the ex-jockey who had the good sense to drop out of the Hearst race, suffered a great tragedy.  His wife Maude Mae died in a hotel fire,  and Jimmy was so devastated he lost his mind and never got it back.  Eventually Glenn Curtiss helped him get admitted to a Florida mental hospital. He died there in 1923, at the age of 37.  He was buried in an unmarked paupers grave. Some of his fellow aviation pioneers collected money to give him a more respectful funeral, but I can find no record of that ever happening. 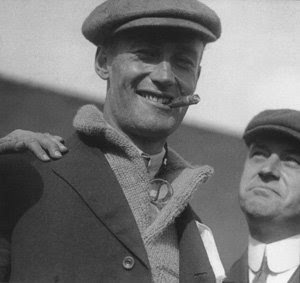 The confident Cal Rodgers was testing a new airplane on Wednesday  3 April, 1912, just off shore of Long Beach, California, when he ran into a flock of sea gulls. The plane banked sharply 45 degrees and slid into the surf,. 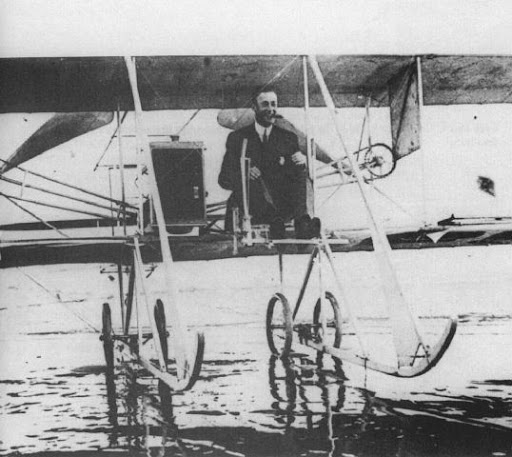 Cal had crashed just feet from where he had posed grinning in the surf with the “Vin Fiz” the previous December.

The engine broke loose from its mounts and crushed Cal, breaking his neck. He was still breathing when swimmers pulled him from the water, but he died soon after. Cal Rodgers was the 127th pilot's death since the Wright Brothers flight in 1903, and the 22nd American aviator killed. Considering the number of people flying in 1912, those were still terrible odds. 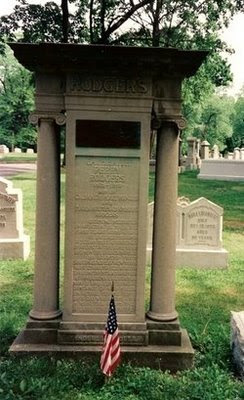 Cal's mother, Maria (Rodgers) Sweitzer, took procession of her son’s body and had it shipped back to Pittsburgh. There Calbraith Perry Rodgers was buried in Allegheny Cemetery under an elaborate tombstone (above), marked with the words “I Endure, I Conquer.” 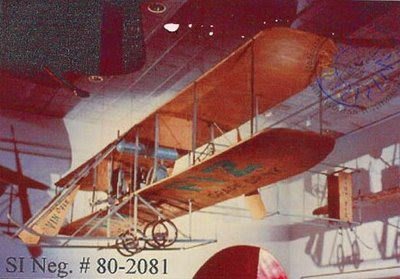 Cal’s brother John took procession of the “Vin Fiz Flyer” and had it shipped back to Ohio, to the Wright Brother's shops, to be repaired. He offered the Flyer to the Smithsonian, but they already had a Wright B, so instead, in 1917, the Flyer was donated to the Carnegie Institute in Pittsburgh. In 1934 the Smithsonian changed their minds and bought the “Vin Fiz Flyer”.  Refurbished and rebuilt, that is the plane that hangs from the ceiling in the Air and Space Museum in Washington, D.C. 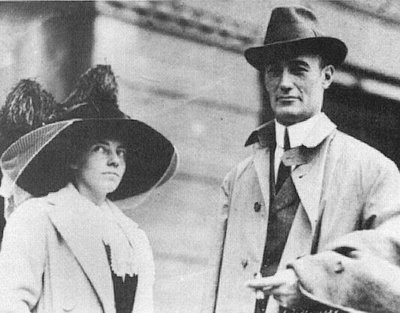 And little Maude was determined to endure and conquer as well. After lengthy court battles with her ex-mother-in-law in California, Maude was awarded legal possession of the “Vin Fiz Flyer”. How could this be? Wasn’t the Flyer back in Ohio, being rebuilt? It was. But the contents of the “Vin Fiz Special” hanger car contained enough spare parts, many of which had actually flown sections of the transcontinental odyssy, to construct a second “Vin Fiz Flyer” and still claim it as the “original.” 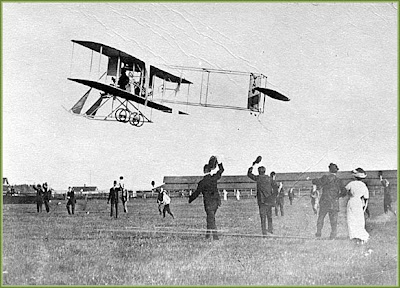 Two years after Cal’s death, Maude married Charlie “Wiggie” Wiggin, who had shown such faith and devotion to her Cal; two lonely souls who shared an adoration of another man. “Wiggie”, had, by this time, acquired his own pilot’s license. And Maude and Wiggie made a living for a few years barnstorming their “Vin Fiz Flyer” around the country. And then they quietly faded out of history. 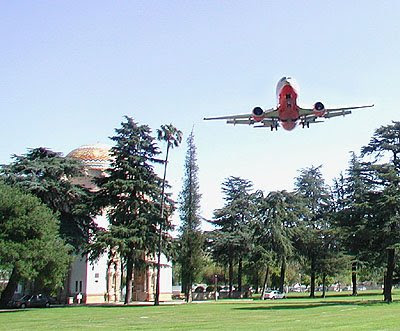 It would be ten years later when Jimmy Doolittle would cross the continent in less than a day - 21 hours 19 minutes, with just one stop for fuel. And as you sit in your tiny passenger seat, crammed four to an aisle, held prisoner on the tarmac for endless hours, forced to use a toilet designed for a diminutive Marquise de Sade, charged extra for a micro-waved “snack”, a pillow, a blanket, a soda or a thimble full of peanuts, even the privilege of using the rest room... 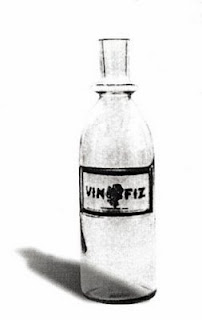 ...consider the sacrifices of those who suffered before you; landing in chicken coops, landing in tree tops, landing in barbed wire fences, landing in Texas for day after day. And remember the immortal words of Cal Rodgers; “I am not in this business because I like it, but because of what I can make out of it.” It has become the mantra of every airline passenger world wide. 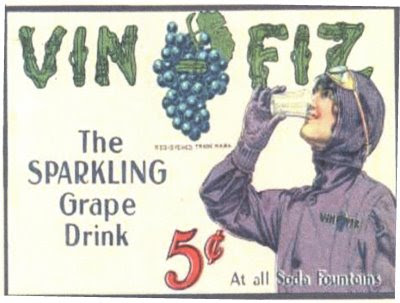