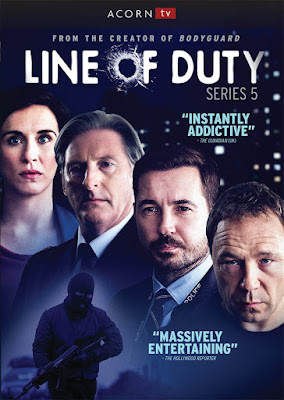 2- An undercover cop is trapped in in a crime group, and a police leak enables a raid.
3- Corbett wants to exploit corrupt cops, and a new discovery reveals the corruption goes further up the ranks than they originally suspected.
4 - There is still fallout from the raid, and a chance opens up to capture Corbett.
5- An investigation of Corbett's past explains some of Hastings behavior.
6- Kate & Steve find themselves trapped between loyalty to Hastings and their vow to find the truth.
Overall, this was an awesome series. The action level is constant and there's never a dull moment. If you want to get the advantage of a full set of amazing stories that will leave you on the edge of your seat, than this is the box set for you. You can orderLine of Duty Series 5 at Acorn Media. It's also available onAmazon.