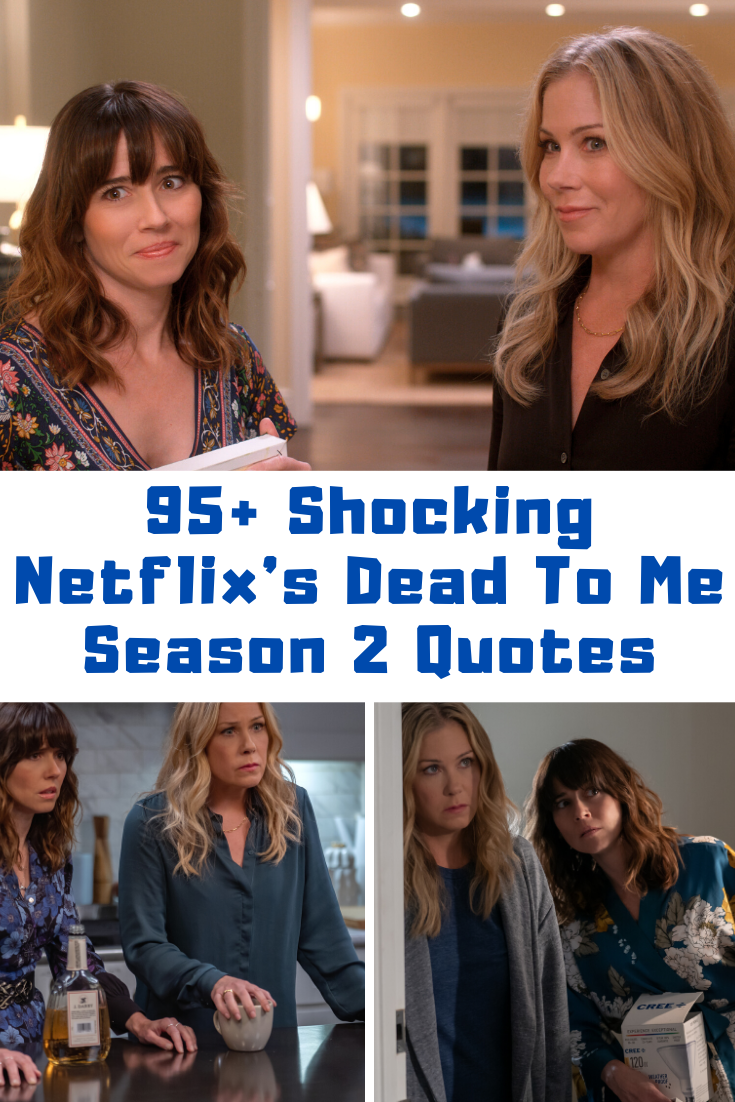 Netflix’s season 2 of Dead To Me comes out this Friday, May 8th.  Season 1 was such a hit and left us on a cliff hanger which had viewers begging for another season.  I received an earlier screener of the new season of Netflix’s Dead To Me and will have a movie review coming soon.  But I also collected some quotes for you to enjoy, because this season is just as shocking!  Now if you haven’t seen the new season yet, you may want to be careful reading some of these quotes because I wouldn’t want to spoil anything for you.  Without further ado, check out this shocking list of Netflix’s Dead To Me Season 2 quotes!

For more movie and television quotes you can check out these other posts: Netflix’s Becoming quotes, Netflix Never Have I Ever quotes, Coronavirus Explained quotes, Netflix Self Made quotes.

Netflix’s Dead To Me Quotes

So let me know what you favorite quotes are from the new season of Netflix Dead To Me.  And don’t forget to check back to read my series review of the second season!

Thank you for not burning everything. –Judy

I also know that you tend to get a little confessy. –Jen

Don’t ever tell a woman she is over-reacting because most of the time she is under-reacting. –Jen

Don’t you wish you had a Mrs. Garrett to tell you everything is gonna be alright? –Jen

Jen, this is Steve’s brother. –Judy

Steve is missing. So is his car and usually calls our mom every night, she hasn’t heard from him in a few days. Nobody has. –Ben 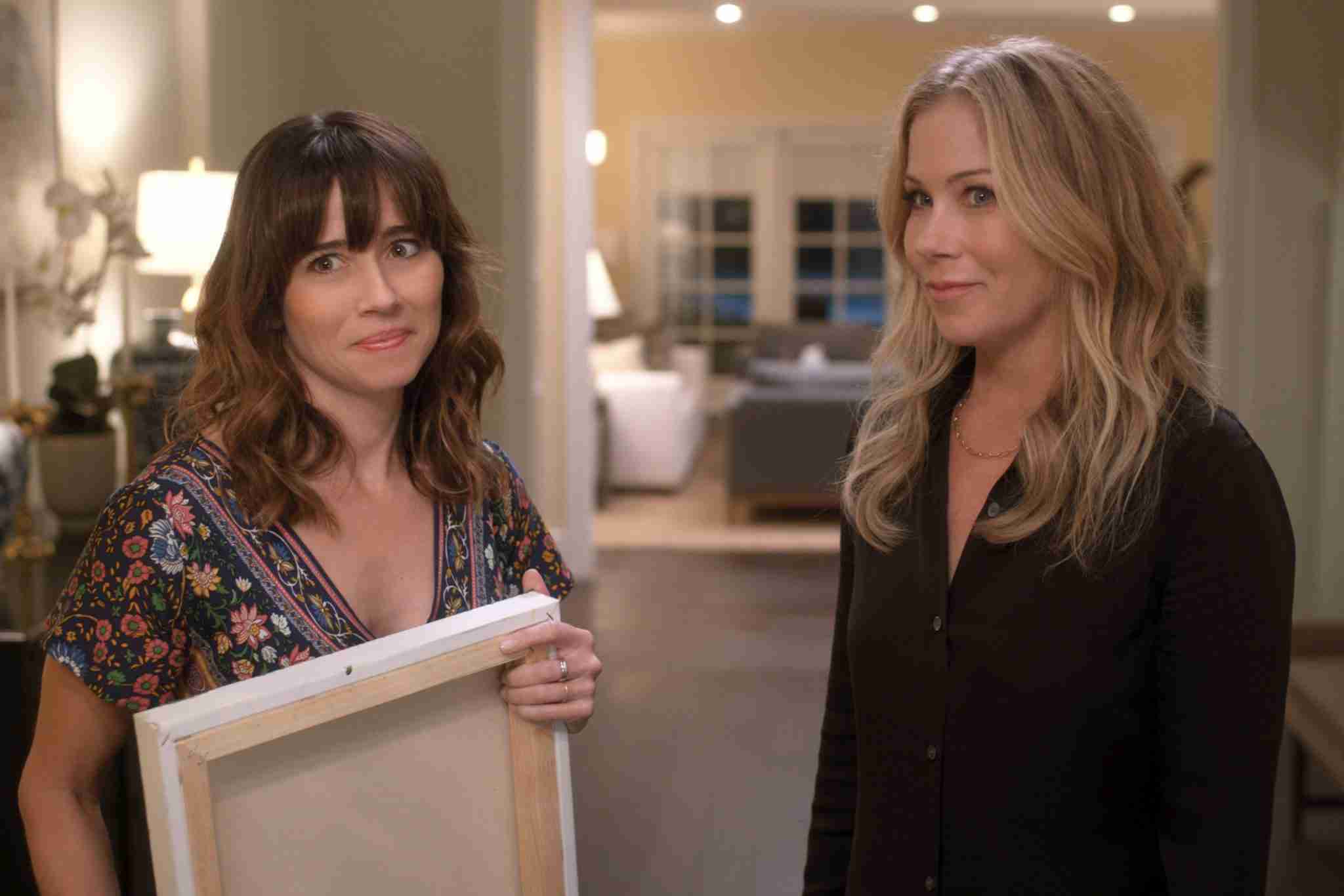 You might have the worse judgement out of anyone I’ve ever met. –Jen

Success and passion are two sides of the same coin. –Lorna

Raising Ted was the great honor of my life. It would be my privilege to raise those boys. –Lorna

I’m glad you guys broke up. I mean it would have been great to have you in the family but he doesn’t deserve you. You’re much better off without him. –Ben

I’m the one that turned Steve in, to the Police. –Judy

You did the right thing, he brought this on himself. –Ben

He was always so good at everything, except doing the right thing. –Ben

Are you alright? You seem vulnerable, it is a strange color on you. –Christopher

There is no speed limit on the highway of love. –Christopher

You know how people drown, Mrs. Harding? They get into a water they think they can handle and then a riptide comes and pulls them under and then it is too later. –Detective Ana Perez

Steve was peripherally involved with the Greek mafia.  Peripherally.   –Judy

I like to think if you love someone, they are always with you no matter where you go. –Judy

I wish black mold was the worse thing going on in my house. –Jen

It’s not my fault that they are f%&*$&% pussies that want to protect the life of their unborn child. –Jen

He is a monster. Why do you owe it to his soul? –Jen

I just wanted to tell you that I forgive you. Thought you should know that. –Jen

It’s a gals weekend with my best friend. My B Fry. –Jen

Can you please tell me what to do right now, cause you are the nice one and I’m the sh%&&$ one. Tell me how I can do something nice for you cause you are scaring me a little. –Jen

The morning after we hit Ted, I woke up and Steve wasn’t in bed. I found him on our favorite spot on the beach and he was just sitting in the wet sand. He was crying like a little kid. –Judy

I think sometimes people need a friend more than they need the truth. –Jen

I’m telling you since I sent the petrified rock back, there’s been an energetic shift. –Judy

I’m sorry are you the wine Sheriff? Because I am the dick Police and you have the right to remain f%&*%&$ silent. –Jen

I kind of need some space to get my life back on track. –Jen 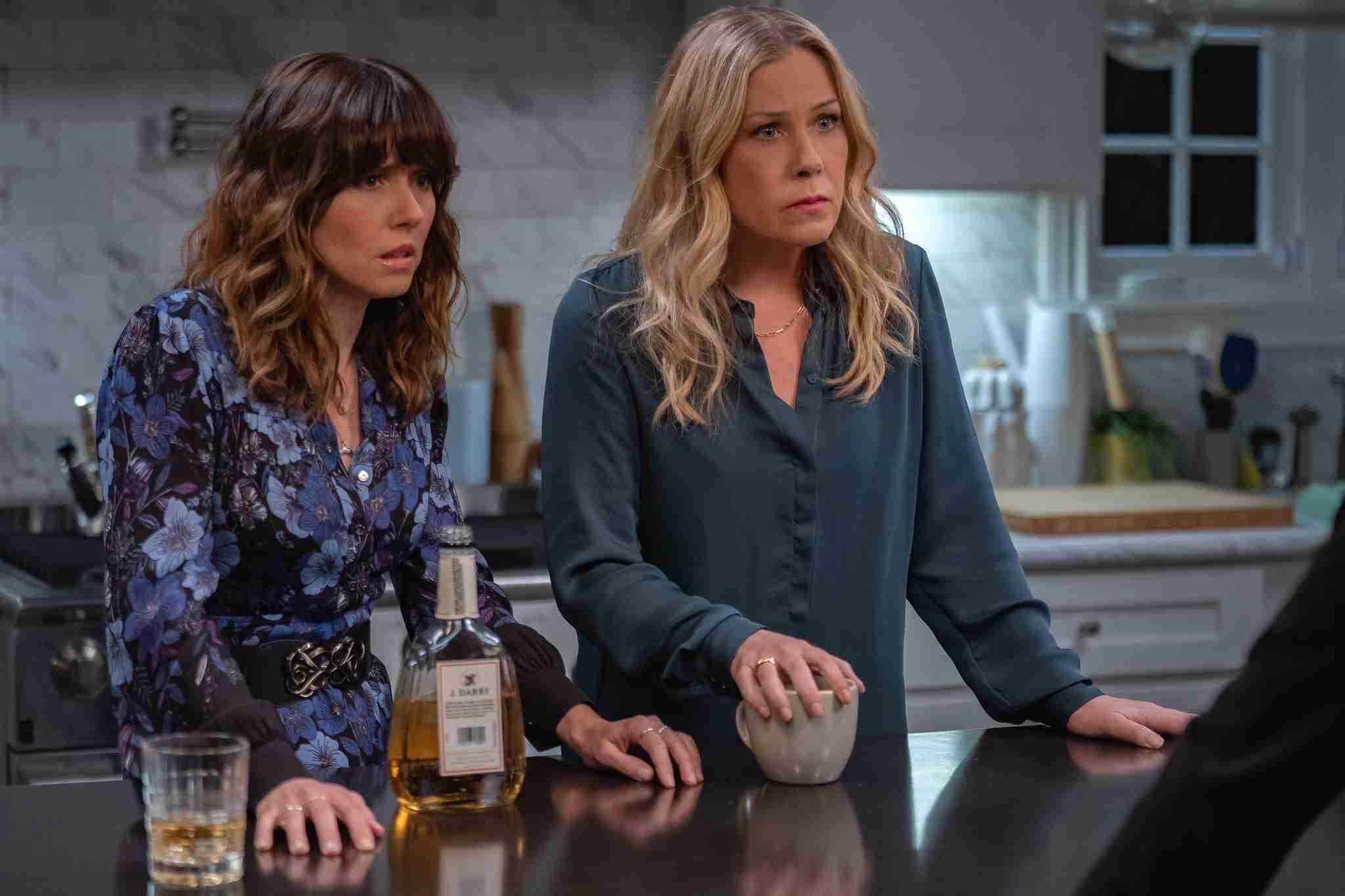 Why can’t you just shut your mouth and do what you’re told. –Judy

My name is on the deed, Ted insisted. –Lorna

I won’t let you sell the only home those boys have ever known. The home filled with memories of their father. –Lorna

Your personality is off putting, it is effecting your sales. –Lorna

The only harder sell than a moldy house is a bitter woman. No one wants to live with that. –Lorna

Shut up, shut up. It is not him, you don’t know what you are talking about. –Jen

You aren’t the first lady I made cry. –Ben

I sometimes feel that Steve got all the confidence in the womb and I got the heart defect. –Ben

I think Jen is your mother and you listen to her and trust that she knows what she is doing. –Judy

I lost my virginity in a car. It was beautiful. It was a 78 Corvette. –Judy

Lets forget the have-to’s, OK?  What do you want to do? –Jen

What I need is for you to get out of my house. –Detective Ana Perez

Pushing your enormous head out of my vagina was a lot of work. –Jen

Any hope that I do have is kind of on life support at the moment. –Ben

It just came out of my mouth, I couldn’t shove it back in there. –Jen

It is a total WWJD. What would Judy do? –Jen

I don’t have a lot of nights like the night we just had. –Michelle

I pray you never have to live through what I am living through. It is every mothers worst nightmare. –Steve’s Mom

That girl Steve was seeing, is pregnant. –Judy

Starting today we set up an anonymous tip line with a substantial reward. –Ben

If there is a silver lining in all of this, it is me and you. –Ben

Why did you have Steve Woods car? –Charlie

I woke up this morning and had one of those mirror moments, when you just want to erase everything you see. –Ben

When Steven gets home, I am going to make sure he thanks you properly. –Steve’s Mom 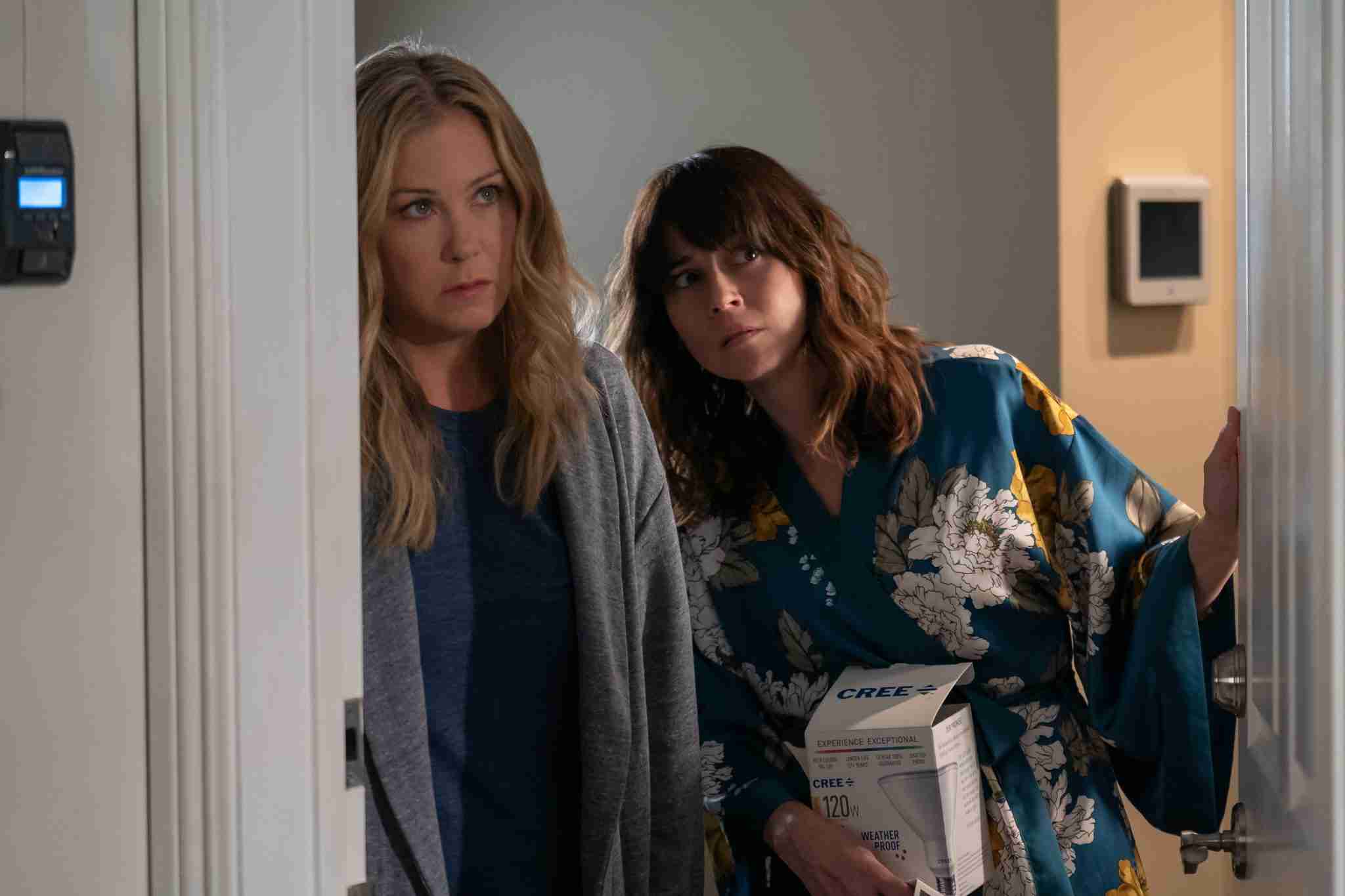 I think scars show you went through something hard and you survived.  And it is your story. –Jen

I don’t want to lie to you and I don’t want you to think I kissed you because I was drunk. Truth is I’ve wanted to kiss you for a long time. –Ben

I lost some people recently and I didn’t want anymore time to go by before I saw you again. –Judy

I think we should dance it out. –Ben

I really hope someday you can see yourself the way I see you. –Ben

I’m on your side, why are you mad at me? –Charlie

I’m going to take the blame for it. –Judy

The night Steve died, I was going to kill myself. But you called me and you saved me. –Judy

He was looking for a way out. Ted, he jumped in front of our car. –Steve

There is something I have to confess. –Jen

He is a teenager with an under developed frontal lobe and he saw something he wanted, so he took it.  He is an idiot but he is not a killer. –Jen

I wanted to hate Judy, I really did but it is impossible. It is like hating a baby or something. You just can’t. –Jen

She sees the good in people, even when it isn’t there. –Jen

I guess I thought maybe, you get what you deserve. –Judy

You are going to go home and we are never going to talk about what we didn’t find here ever again. –Detective Ana Perez

Sometimes justice just has a way of working itself out. –Detective Ana Perez

I forgive you. –Judy

I don’t want to carry around any more pain. –Judy

You need to forgive youself. –Judy

Look at us, working together to take down the man. –Judy

I don’t want to resent you anymore Lorna, it is exhausting. –Jen

That’s your stop sign, you made that happen. –Judy